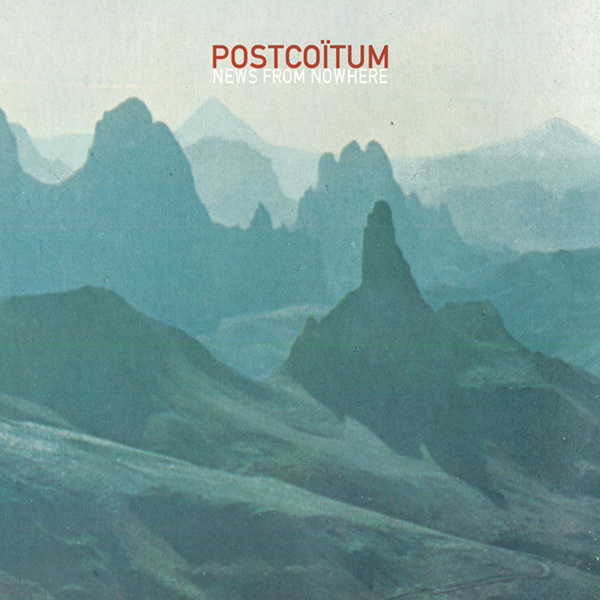 French electronic duos are—as far as the whole world knows at this point—a guarantee of exceptional quality music. Drawing comparisons is always dangerous so without inconveniencing the recently deceased Gods of electronic music, let’s just say that Postcoïtum seem set for an exciting future. The band’s second record, News from Nowhere, offers an exciting and hallucinatory mix of techno, ambient, psychedelic, kraut, and industrial rock, but to keep it simple—and quoting directly from the band’s Instagram—a half hour of music “nourished by electronic, industrial or rock references”.

In reality, Postcoïtum’s offer is quite straightforward: techno-infused electronic music puffed up by lavish and sugary layers of synths, industrial arrangements, and 1970’s krautrock throw-backs. Despite hailing from France, the duo’s music has a lot in common with their German electronic music counterparts. Through its half hour- runtime, News from Nowhere delivers punches of krautrock, kosmische Musik, techno, and psychedelia—all that good stuff we’re all grateful to the Germans for. Put them on a chart and Postcoïtum sit comfortably beside Maserati, Caribou, and German house and techno acts. Place them on a map and they habituate halfway between the Rhine and the French Riviera.

Such a shameless recall to German psychedelia is no surprise for a record that wears its “kosmische Musik” influence on its sleeve, but this strong and original display of intention deserves your attention. The record doesn’t just reminiscence these places, it directly catapults you to destination. All these images and metaphors are a (i.e. my) desperate attempt at painting a picture using this record as inspiration, except, News from Nowhere really is a kaleidoscope of a billion hallucinating pictures tightly packed into half hour of hallucinogenic music. As a central theme this record reads late 70s West Germany to 80s French Riviera, and back. Evoking images of youth rebellion in post-industrial cities and sun-kissed skin in giant straw hats chilling in lavish Mediterranean landscapes, News from Nowhere is the perfect soundtrack to a Lamborghini Countach vs Porsche 930 car chase from Dusseldorf to Saint-Tropez. A burst of colour on the walls of a Brutalist building or a monolith of grey concrete dominating the colourful shores Riviera—take your pick. Through vivid brush strokes of malachite, turquoise blue, and shocking pink, Postcoïtum craft an album that is more soundtrack to a psychedelic climax than the proverbial cigarette after sex.

Doubling down on such a variegated sound palette, Postcoïtum also offer a broad selection of moods and vibes on News from Nowhere as well, spanning from horny to celestial, from exhilarating, enthralling and ferocious to languid, eerie, and chilling. The album’s incipit opener “Desire and Need“, is the perfect sonic re-encapsulation of Saturday Night Fever if your weekend fix is sweating your ass off, raving at dive-y underground bars or basement techno clubs. Or maybe like that other French duo once sang you’re just “up all night to get lucky”—I don’t know—all I know is that through the song’s tribal beat, I can smell the sweat of a tightly packed club in Berlin or one of those floating boat clubs along the Seine. The following “Calipolis” the most psychedelic of the six tracks, is the soundtrack to a cat’s nightly mischievous raids, only the cat is on acid. “Araschnia Levana“, with its haunting, mysterious, and kind of unsettling mood, would have landed perfectly on HBO’s Chernobyl docuseries, whereas “Rojava“, with its ‘arabesque’ synths is what the shimmering sea of the French Riviera would sound like in a 1978 B-quality Erotic Action flick. Closing duo, “La Bestia” and “In Paradisum“, are techno monster tracks that I can’t wait to dance my heart out to, and alien-abduction-meets-noir-detective-show-theme music respectively, fittingly putting an end to a sonically hallucinating trip.

Moving through such a vast array of soundscapes at heart-stopping speed, News from Nowhere’s delivery shouldn’t be inclined to lose the listener throughout a short but exhilarating ride. Unfortunately, the middle cut of this record is where Postcoïtum start to lose a bit focus and News from Nowhere’s initial ‘high’ starts wearing off. “Araschnia Levana” never quite develops over its long-winded crescendo resembling more a chrysalis than the beautiful butterfly it should become. Following track, “Rojava“, suffers from the opposite illness, presenting one too many ideas without really carrying any out. Undecided between lavish synth-pop and abrasive techno, the song fails to take a turn in either direction before ending abruptly. Both tracks are still great really, but it does feel like both could have offered plenty more vintage synth galore if developed further.

However, despite its bumpy middle section, News from Nowhere’s brief visit does leave a mark, as the later cut of the record is as convincing as the first. “La Bestia“, is a beast of a techno track perfect for a cavernous rave but with the glamour of a 1970s diva thanks to layers of sugary, sticky, and gorgeous synths. These roaring synths really help the track emerge from the traditional techno droolings and give it a more distinctive, convincing, and totally hot character. It’s a very refined, very stylish, and very hot track. Oddly enough, “In Paradisum” closes the record on a surprisingly quiet note, being the more “orchestral” track on the record. The closer is a chilling slow burner where slowed-down synths play over monumental classical drums before liquifying into a thick languid fog. Such a dreamy yet haunting track might seem odd on such a vibrant record yet the tasteful arrangements give this track a convincingly evocative character. Reminiscent of the later works of Radare and AUA for example, “In Paradisum” is effectively a heavenly unsettling auditory experience.

Through their fitting and inspired combinations of old and new, Postcoïtum speak a universal language that is both the past and present of electronic music. The arrangements are tasteful and never tacky, and however left-field, the throwbacks sound convincing and not-at-all forceful.

Although suffering from a general lack of direction, News from Nowhere is more than the sum of its parts and through its short runtime offers a delightfully refreshing listening experience. Despite its obvious influences, News from Nowhere has something to offer to electronic music aficionados and casual listeners alike. Through their fitting and inspired combinations of old and new, Postcoïtum speak a universal language that is both the past and present of electronic music. The arrangements are tasteful and never tacky, and however left-field, the throwbacks sound convincing and not-at-all forceful. It helps too that the avant-garde character of this record appears fresh and youthful, just as the homages to cult classics come off as nothing more than due reverence.

This record’s true power lies in this universality; in its ability to evoke pictures of distant places both in time and space, with brilliant, vivid, and lively imagery. From grim postcards from a dystopian past to vintage ads of the French Riviera, six tracks for six images, all in shockingly psychedelic colours. These songs are the remnants of a time capsule; six objects unearthed from a distant past that rightfully or wrongfully doesn’t exist anymore but has gone down in history with unmistakable distinctiveness. The end result isn’t always what you’d expect from these memories, but it’s always fun and then more fun to revisit.

This album is: ****illuminating.

News From Nowhere was released through Atypeek Music and Daath Records on September 2, 2020. The album is available in vinyl and digital formats via the Daath Records Bandcamp page.

Hey it's Fed (you might remember me from Arctic Drones) I enjoy writing about music and food and what keeps me not so young and not so healthy. View all posts by Federico